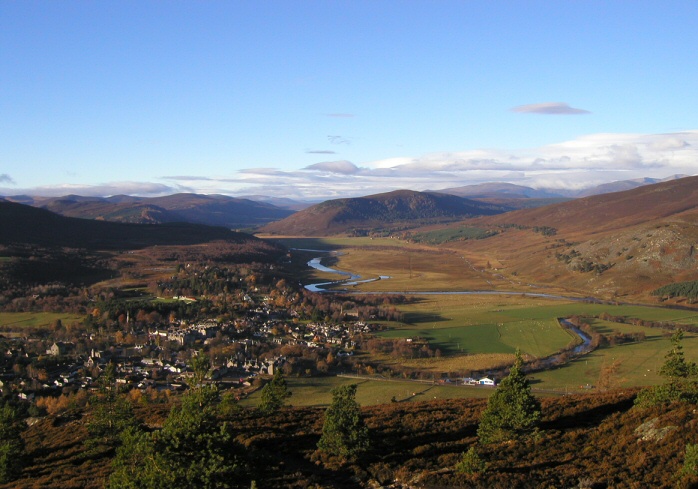 Braemar village lies at the foothills of the Cairngorm mountains, and in the Cairngorm’s National Park. Its location at the confluence of the glens has assured its place in history. It was in Braemar that the standard was raised during the Jacobite Rebellion of 1715.

For walkers Braemar has 24 mountains over 3000 feet (Munros) of which 3 are over 4000 feet. We also have several low level picturesque walks for all abilities in the surrounding area.

Balmoral castle, the Queens summer residence and major visitor attraction is just 8 miles away and the community owned Braemar castle 1 mile away, you come to realise why Braemar is such a popular destination for people from around the world.

The Duke of Rothesay Highland games Pavilion opened by Her Majesty the Queen on the  1st September 2018 situated in the games park tells the story of Highland Games and gatherings and is open to the general public.

We have the highest 18 hole golf course in the UK surrounded by mountains with the River Clunie winding its way through the course. The relaxed yet challenging setting is open from April to October and after a round why not enjoy a drink or meal in the welcoming clubhouse looking over the first fairway. There are other courses in the area including Ballater, Aboyne and Banchory.

For whisky lovers there is Royal Lochnagar distillery, one of the smallest working distilleries in Scotland, just a short drive away.

In winter we have Glenshee ski centre about 8 miles away and the Lecht ski centre about 45  minutes drive away offering skiing and snowboarding. Glenshee is the largest ski centre in the UK covering 4 mountains, 3 valleys and with 21 lifts and tows you will find everything from beginners runs through to off piste on Glas Maol.